This week, I got to watch one of my oldest and dearest friends compete on American Ninja Warrior! If you aren’t familiar with the show, it’s an individual race through an extremely difficult obstacle course. To be successful, one has to have incredible grip strength, endurance, flexibility, strength, balance and focus. All things that Bobby has been working on for the past two years at the request of his kids.

His journey to American Ninja Warrior started when his family began watching the show together. His three children asked him one day when he was going on the show? Instead of making excuses, putting limits on himself or flat out rejecting the idea, he embraced it. At the time he couldn’t do one pull up and now he amazes me with his physical strength and his mental focus.

Bobby lives by the idea that “just because you can’t do it today, doesn’t mean you can’t do it ever.” This guided him on his journey to getting into a new level of physical fitness. But he also practices this in his daily life. Bobby teaches 1st grade. He coaches basketball and started a chess club at his elementary school. He’s shared with me the progression of certain students who struggled in various areas, but gained confidence through the extracurricular activities he’s found so rewarding.

The day before he was to compete, he told his daughter that she can do anything she wants to. He hasn’t been afraid to show his students and his family failure through this process. Bobby has been so excited to just even have this opportunity to tell his story and show his family and students that the world is full of possibilities.

I am so proud of his determination. I can’t discuss the results of his run until the show airs in June. All I can say is that it was exhilarating to watch him reach this major life achievement.

Spending time with him and his beautiful family this week has given me a renewed sense of purpose, adventure and reminded me to never let go of your dreams. I’m also inspired to make my own fitness goals a priority. Don’t expect to see me competing in American Ninja Warrior, but maybe I’ll increase the difficulty of my yoga game.

I’ll make sure to let you know the date so that you can root for the First Grade Ninja!

Archer, Bobby and I backstage at American Ninja Warrior

My dad gets ocular or retinal migraine attacks. He gets a visual aura that lasts 15-20 minutes and then he doesn’t get the head pain. Oddly, his attacks started after I became chronic. 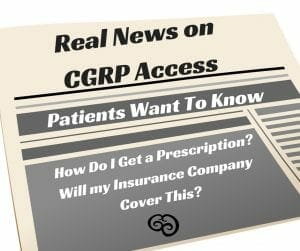 Aimovig, the first CGRP inhibitor drug, was approved by the FDA on May 17, 2018. This is extremely exciting news, but there are a lot of questions swirling around as many of us are anxious to try this new medicine. For the most up-to-date information about Aimovig visit Aimovig.com. The site includes Frequently Asked Questions, information…

The Golden Gate Bridge is truly a masterpiece of iconic architecture. The 4,200-foot-long, art-deco suspension bridge is made of cable-spun steel and concrete. It’s quite an experience to drive over the freezing cold waters of the San Francisco Bay. Sometimes there is so much fog that it hides the top of the pillars painted in…