I find it important to share the trials and struggles of dealing with insurance companies and doctor bills. It can become a job in and of itself. For those in chronic pain, we only have so much energy to deal with this crap. I feel like they assume you’re not going to fight them and just give in. While I don’t want to spend endless hours on the phone, I am not going to be taken advantage of or stuck in the red tape.

I’m sharing a two-party series on an insurance issue from 2015 that took 10 months to resolve. Just know that you are not the only one who gets bogged down in the bureaucracy.

In 2015, I switched insurance carriers through the Healthcare Exchange. I didn’t receive my insurance card or any type of member ID until late March. I can’t begin to tell you how many hours I spent on the phone trying to get this resolved. If I didn’t get the answer I needed, I kept telling the agent to get me someone higher. Eventually it worked and I had proof of insurance coverage three months after making the change. Estimated amount of time spent trying to get proof of coverage: 20 hours over 3 months.

During those three months, I couldn’t go without my medications and I had doctor appointments. I had to pay for everything out of pocket. The new insurance company assured me that once my paperwork was processed, I just needed to submit my receipts and I would get reimbursed. Total amount spent out of pocket $784.08.

After submitting three months worth of reimbursements, I received a letter saying they needed an explanation as to how many days each medicine covered. The form I filled out says 30 pills, wouldn’t one assume that it was a one-month supply? Anyway, I gave them what they asked for and sent the info back. Estimated amount of time spent on reimbursement: 3 hours.

Where’s the rest of it?

So, after spending 13 minutes on the phone, the representative said the claim would be reprocessed within three business days and I would receive a call-back with the outcome. Let’s see how this review goes and if I see any more money. I did confirm that the measly check for $65.33 was ok to cash. Great, thanks.

Next week, I’ll tell you how the rest of it unfolded. Feel free to ask me to explain further any of these terms that can be extremely confusing!

This week, I got to watch one of my oldest and dearest friends compete on American Ninja Warrior! If you aren’t familiar with the show, it’s an individual race through an extremely difficult obstacle course. To be successful, one has to have incredible grip strength, endurance, flexibility, strength, balance and focus. All things that Bobby…

Shrinking into the Pain

At My Tallest The beginning of my day starts when Archer leaves for work around 9am to brave the LA traffic. Although I just want to crawl back into bed, I start my day with a smoothie. I sit on the balcony just to double check the ocean is still there (my fantasy land of… 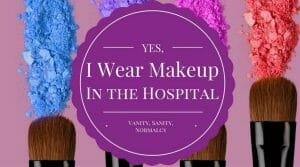 Yes, I Wear Makeup in the Hospital

Makeup, four-inch heels, power suits, cocktail dresses, regular hair and nail maintenance. That was me in the professional world. Client meetings, networking events and charity functions. They all require the professional look.