The Golden Gate Bridge is truly a masterpiece of iconic architecture. The 4,200-foot-long, art-deco suspension bridge is made of cable-spun steel and concrete. It’s quite an experience to drive over the freezing cold waters of the San Francisco Bay. Sometimes there is so much fog that it hides the top of the pillars painted in “international orange.”

Every time I cross this bridge, I am reminded of the words from a massage therapist, “you have steel cable under there.” That was the perfect analogy. It’s something that I have struggled with my whole life. I stretch every day, am conscience of my posture, take breaks from the computer and use peppermint oil or tiger balm to keep those muscles relaxed. But when I’m asleep, I curl into a ball and clench my fists, basically to protect myself from the pain. I sleep in odd positions. None of this helps to release the constant tension in those areas. 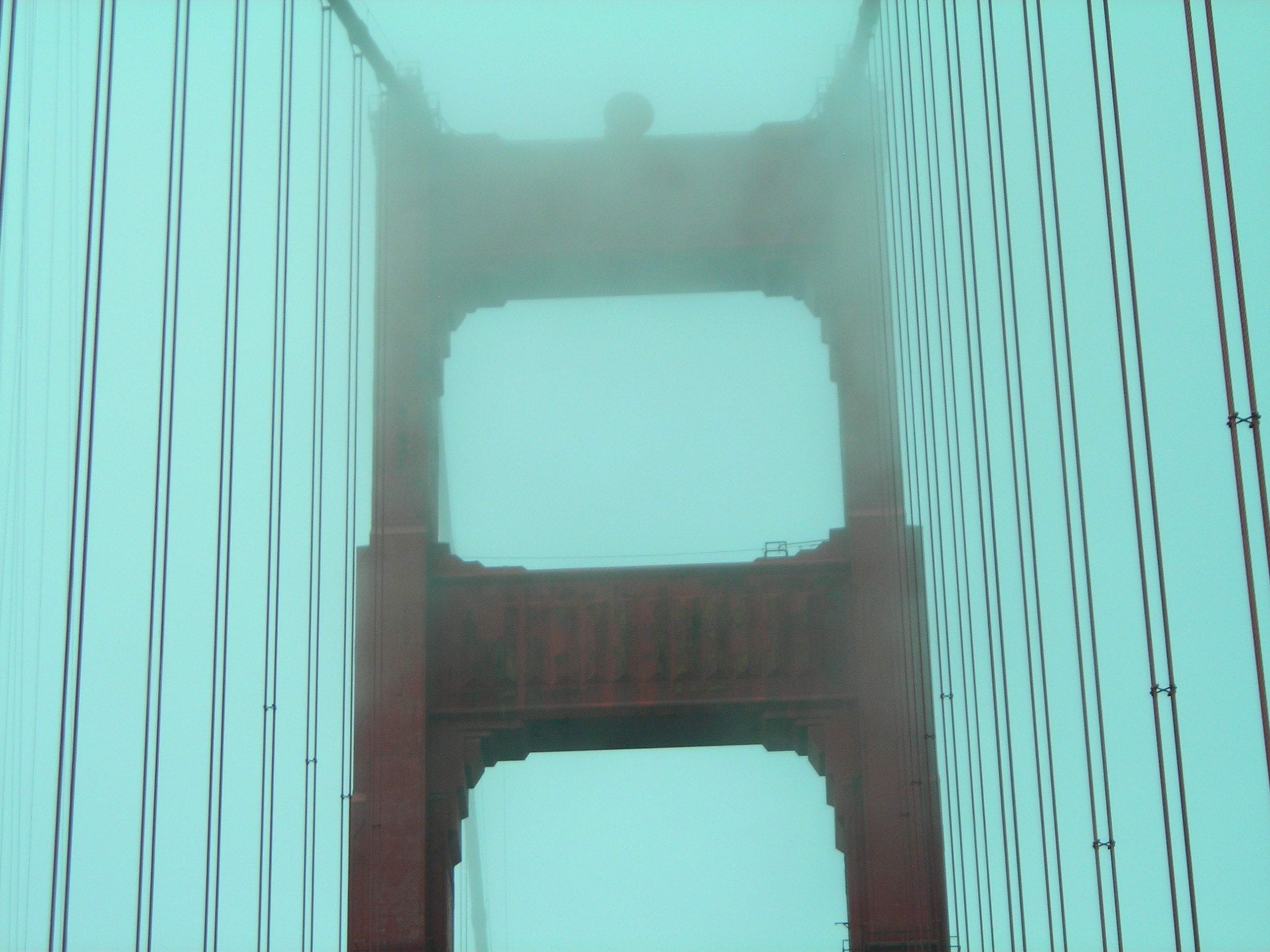 Even in the fog, the iconic color stands out.

The relationship between the constant tightness in my neck and shoulders and migraine attacks have a whole chicken and egg aspect to them. Do the attacks cause the steel cables or do the steel cables contribute to the attacks? I think it depends on the day. If money were no object, I would get massage more often. Since this isn’t my reality, between appointments I try to manage the tightening muscles a variety of different ways. Exercise, yoga and being aware of my body position can help the effects of a massage to last longer.

The notion that my own muscles get so wound up that someone else described them as steel cables has stuck with me for years. I love architecture and the imagery of the power of what steel cables can do to fortify a structure has fascinated me. As a numbers nerd, I decided to delve into the history of the Golden Gate Bridge to see if there were additional similarities with the experience of migraine. All statistics on the bridge can be found at www.goldengatebridge.org/research/facts.

I’m a very visual person. The steel cables of the Golden Gate Bridge perfectly represent to me the state of my body caused by migraine. Is there anything that you feel accurately represents your life with migraine?

Posted in My Voice

On Tuesday and Wednesday of this week, Health Union (parent company of Migraine.com) invited all the HQ staff, writers and moderators to join together for the first time at their new space in Philly. One of our co-founders said it best- “Welcome Home.” And that’s exactly what these 2 days felt like.

Pain Week is an annual conference focused on pain for the health care professionals who see patients who have a multitude of disorders and diseases. Doctors, pharmacologists, nurse practitioners, and those who offer complementary and alternative therapies all gather to attend seminars on the latest research in this field. I was there to represent US…

The deadline for filing federal and state taxes on a personal level is April 17th! I keep meticulous records of all of my expenses. As of 2013, if your medical costs are more than 10% of your Adjusted Gross Income (AGI) you can deduct them. So if you made $40,000 last year and your medical…